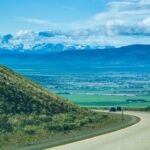 For years, staff at the City of Yakima have managed all the geographic data for the municipality and used imagery as a tool to support the city’s government, police, fire, transit, drinking water, refuse, and utility services.

While it’s been integral for Yakima decision-makers and city advancement, managing and making the city’s vast imagery archive accessible has been one of its biggest challenges.

Historically, the city has collected aerial imagery every two years. After a multistep process, staff stored the images as physical copies or on servers and external drives. Yet storage was limited, and the imagery was difficult to access for anyone requesting it, making managing the city’s imagery a recurring administrative burden for the geographic information system (GIS) department.

To centralize the imagery for citywide benefits, GIS department staff implemented ArcGIS Image for ArcGIS Online from Esri, the global leader in location intelligence. Now all Yakima’s imagery is stored in the digital cloud and can be accessed by anyone through the city’s GIS portal. Updating the new imagery, which previously could take up to a full day to complete, is a one-step process that’s now finished in a matter of hours.

“ArcGIS Image for ArcGIS Online streamlined the administrative process and made it easier for other people to use imagery,” said Randy Bonds Jr., the city’s web app developer and GIS administrator. “To me, that was one of the biggest advantages besides the space and costs saved—it has benefited everyone in the city.”

Adopting ArcGIS Image for ArcGIS Online freed up GIS department staff time for other important projects and services, such as creating CityMap. This public-facing resource hosts all imagery and data layers collected by staff such as assessor parcels; irrigation, planning, solid waste, and water departments; and transit. Accessible through the city’s GIS portal, CityMap provides Yakima’s 94,000 residents with reliable imagery and up-to-date data for better decision-making.