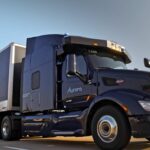 At the end of Q2, Aurora Innovation, Inc. delivered its Beta 3.0 product update and demonstrated its Fault Management System – specifically the Aurora Driver’s ability to detect system issues and respond by safely pulling over to the side of the road without any human involvement.

Earlier this year, Aurora committed to demonstrating its Fault Management System in Q3. With this update, the company achieved its milestone a quarter ahead of schedule and implemented it on Aurora-powered trucks operating on public roads at highway speeds.

“Any of a number of factors, from blown tires to damaged sensors, can compromise a vehicle while on the road,” stated Sterling Anderson, Aurora Co-Founder and Chief Product Officer. “Safely detecting and responding to those issues is essential for a reliable self-driving product operating at scale. Our Fault Management System lays the groundwork for safe autonomous operations without vehicle operators, chase vehicles, or remote human fallback systems.”

Aurora’s Fault Management System is designed to actively monitor the health of the vehicle, including the self-driving software, sensors, and on-board computer. When it detects an issue, the Fault Management System will intervene – navigating the vehicle to a safe stopping location from which the issue can be addressed. This is a critical capability for removing vehicle operators, meeting the rigorous requirements of Aurora’s Safety Case Framework, and ultimately scaling its autonomous vehicle fleets broadly.

To demonstrate this system on public roads, engineers introduced artificial faults that the Aurora Driver interpreted as sensor damage. The Aurora Driver responded by activating the autonomous vehicle’s hazard lights, reducing its speed, and safely pulling over to the side of the road.

As with other elements of the Aurora Driver, the Fault Management System was developed and extensively tested first in Aurora’s Virtual Testing Suite, enabling safer, more rapid implementation in the real world. As Aurora prepares to launch its commercial products, this Fault Management System architecture will advance to recognize and respond to additional system issues while on the road.

“Ensuring our autonomous vehicles are safe, even when system issues occur, is a key component of completing our Safety Case Framework,” said Nat Beuse, Vice President of Safety for Aurora. “This is an important step toward removing vehicle operators and commercially deploying driverless vehicles.”

The demonstration of the Fault Management System complements Aurora’s release of its Beta 3.0 product update. This update focuses on end-to-end autonomous operations between Aurora’s terminals that help further advance the Aurora Driver toward commercial readiness, including navigating complicated surface streets between terminals and highways.