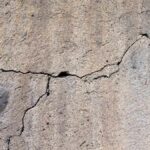 A chemical reaction that causes concrete to crack and deteriorate can now be identified without harm, according to Argonne scientists.

Although they are built to last for decades, bridges, dams, nuclear plants and other concrete structures are far from indestructible. One culprit is the alkali-silica reaction (ASR), often referred to as the “cancer” of concrete.

ASR is a reaction between alkali ions found in cement and silica — the two main components of concrete. The reaction creates a gel that absorbs water and expands, causing internal pressures to build up within the concrete. Over time, this pressure can cause concrete structures to crack and deteriorate. There is currently no effective cure for ASR in concrete, and it is both destructive and time-consuming to identify it in existing structures.

Researchers at the U.S. Department of Energy’s Argonne National Laboratory have discovered a harmless way to detect ASR that could help reduce the amount of expensive testing being done today. Their approach relies on a technique known as electrochemical impedance spectroscopy (EIS), which measures electrical conductivity.

When concrete fails to age gracefully

Older structures like nuclear plants are at risk of developing ASR. One example in the United States is the Seabrook Station Nuclear Power Plant in New Hampshire.

“All existing reactors in the United States are decades old, having mostly been built between 1970 and 1990. Accelerated testing of concrete mixes for ASR were less accurate in those times than they are today. These structures are getting into the zone where problems caused by ASR typically develop,” said Argonne scientist Alexander Heifetz.

The aging concrete within these structures is very difficult to replace if it is affected by ASR. Monitoring and tracking ASR within them, and mitigating its effects where needed, is not only critical to safety but also required to relicense facilities.

Discovering a better way to spot trouble in concrete

The only way scientists can spot ASR in existing structures is by extracting several cores and analysing them under a microscope.

“This detection method is costly, time-consuming and destructive, which is not ideal,” Heifetz said.

Heifetz and his research team have discovered that EIS, which measures electrical conduction, could be used to detect ASR non-destructively. Electrical conduction in concrete occurs via networks of pores, which form during curing and contain ionic fluids (liquids containing charged particles). The gel that forms during ASR spreads to fill the gaps in these pore networks.

Researchers thought ASR could affect the ionic fluids within the pores, as well as the connectivity of the pore networks themselves. This could change concrete’s electric conduction, which they could measure through EIS.

Engineers have used this technique to indirectly measure mechanical properties of concrete, such as strength during curing. But Heifetz and his colleagues are the first to apply this method to detect ASR.

To test its reliability, Heifetz and his colleagues first developed accelerated ASR in samples of concrete, which were affected by ASR to varying degrees. They then measured EIS on the samples and calculated the electrical resistance of concrete from the data.

The team found that ASR altered the electrical resistance of concrete, creating a signature that scientists could use to distinguish and locate ASR.

“We basically found a way to characterize a material’s property based on its current conduction, and in the end, we see there is correlation between the conduction and the presence and progression of ASR,” Heifetz said.

Because EIS is non-destructive, using it to monitor ASR could potentially reduce the amount of curing needed today to diagnose and monitor high-value concrete structures.

“We have the potential to develop this into a technique that can be used on actual structures,” Heifetz said. “We’re working with industry to see if this approach can work on a greater range of geological samples than those used in our study, to hopefully advance its application.”

The findings have been published in the journal of Materials and Structures. Argonne authors of the paper include Heifetz and Sasan Bakhtiari. Authors from other organizations include Igor S. Aranson, Anthony Bentivegna, Peter Bevington, Didem Ozevin, Dmitry Shribak, Meredith Strow, and Yangqing Liu. Preliminary results of this study have been published in the American Society for Nondestructive Testing, American Institute of Physics Conference Proceedings and Transactions of the American Nuclear Society.

This research was funded by Argonne’s Laboratory Directed Research and Development program.