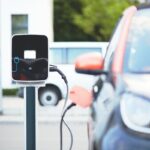 The environmental benefits of ​“going electric” are clear. But states competing for a piece of federal funding will need to demonstrate economic benefits related to installing charging stations, including the potential to generate jobs.

The JOBS EVSE model is part of Argonne’s suite of JOBS tools that use anticipated dollar flows within a specific economy to estimate the economic impact of installing alternative technologies. The JOBS EVSE tool is built on a Microsoft Excel-based platform.

The JOBS EVSE model was developed by Yue Ke, a postdoctoral researcher at Argonne. The model focuses solely on the electric vehicle supply equipment that will be needed by different types of charging stations.

Users can create their own specific scenarios in the JOBS EVSE tool including geographic region, number of charging stations, electricity price and other factors.

The JOBS EVSE model takes a holistic approach to determining economic impact on a community. The model factors in the charging station equipment, investment, operating costs and revenues for the entire energy supply chain and the related economic growth. The JOBS EVSE tool analyses the operations and maintenance costs of a charging station for up to 10 years.

Just as gas stations are hubs for generating revenue, the network of charging stations will have a ripple effect on the economy. Workers and business owners who spend their earnings in the community will impact fast-food restaurants, convenience stores, local shopping and more.

For example, a construction worker who spends money at a restaurant creates the need for waiters and waitresses, and drivers who are shopping while their vehicles are charging create additional retail jobs.

“All of the money spent in the economy related to building and operating the electric vehicle charging stations produces dollar flows in the economy,” Mintz said.

States seeking federal funding need to submit detailed plans to the government. One state, Virginia, turned to Argonne to use its JOBS EVSE tool in 2021 as a test case.

Virginia Clean Cities categorized their plan in three levels based on electric vehicle supply equipment power output. The charging process gets faster as the power level, or watt, gets higher. A kilowatt (kW) is a measure of power equal to 1,000 watts.

“Except in residential units, we assumed there would be two ports or plugs per charging system. Users can charge two vehicles at a time at a single unit,” Ke said.

Virginia’s plan only factored in charging stations that generate revenue. Argonne’s JOBS EVSE model projected that the plan would create 274,000‒291,000 jobs associated with charging stations over 10 years. The plan showed that 40,000 jobs would be created just within the year 2030.

“Job creation numbers were really helpful and pleasantly surprising. I think it’s especially cool that the JOBS EVSE model could tell the difference between a wide variety of jobs that included categories like marketing and advertising,” Harned said.

More federal funding on the way

Along with the $5 billion in federal funding for charging stations, more money will soon be available. The infrastructure law allocated another $2.5 billion for local grants, primarily to fill gaps in the charging networks located in rural areas and disadvantaged communities.

Mintz encourages applicants to take advantage of Argonne’s free JOBS EVSE tool to generate the data that could increase chances for securing the funding needed to get public electric charging infrastructure projects moving.

“There is significant funding out there right now,” Mintz said. ​“To meet climate change goals, it is critical to make these charging stations available as soon as possible.”

JOBS EVSE was developed with funding from the DOE’s Vehicle Technologies Office.

0 0 0
Previous : Urban Digital Twins are a key strategy for a clean energy future
Next : ArcGIS Image for ArcGIS Online to enhance City Services in Yakima, Washington