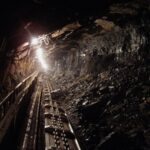 An active underground mine can be a seismically noisy environment, full of signals generated by heavy machinery at work and induced seismicity. Now, researchers working with data from a longwall coal mine demonstrate a way to extract and separate the signals generated from mining activity from the background seismic noise of the area.

This method, described in the Bulletin of the Seismological Society of America, could be useful in monitoring seismic events and the structural integrity of the mine as operations continue, according to Santiago Rabade, a Ph.D. candidate at the University of Utah, and colleagues.

Longwall coal mines are underground mines where a large wall or slice of coal is removed in miles-long panels. The researchers used data collected over one month from a 17-geophone array on the surface one such mine. The array was originally set up to record seismicity of the mine and seismic ambient noise over time, looking for potential subsurface changes.

Rabade and colleagues first used a cross-correlation method, which compares signals from each geophone station against each other within 5-minute windows. They identified two distinct groups of waveforms in the 1-5 Hz frequency range—one containing strong and coherent signals and one without these signals.

After further analysis, the researchers could separate windows of time characterized by the strong coherent signals from those without the strong signals. They determined that the strong signal time windows were consistent with the progression of mining, while the other windows demonstrate the persistent seismic background noise that was expected for the region.

The researchers then used a location method on the mining-dominated windows to determine their sources. Their results over 24-hour and 5-minute time scales matched well with the position of the overall longwall operations and the location of recorded seismic events. The method makes it possible to “find different sources occurring simultaneously if they are coherent enough,” said Rabade.

Rabade said the researchers haven’t investigated whether the method could locate different types of individual machinery. “We think the location obtained from the time windows with mining activity is dominated by the signals emerging from the longwall shearing machine.”

While the location method they used has been applied previously to track hydrothermal and volcanic tremors, he said the full workflow described in the BSSA study “can be a powerful tool to monitor real-time seismic sources in many active environments, for example, mines, volcanoes, geothermal or hydrothermal systems, fracking or wastewater injection sites, or oil and gas extraction areas.”

While the researchers used one month of data to develop and test their method, Rabade said their process could be accelerated in future monitoring applications.