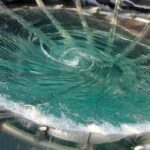 In one of the grand challenges of science, a Flinders University device which previously ‘unboiled’ egg protein is now unravelling the mystery of incompatible fluids; a development that could enhance many future products, industrial processes and even the food we eat.

Using the highly advanced rapid fluidic flow techniques possible in the Flinders vortex fluidic device (VFD), the Australian research team has capped off 10 years of research to find a way to use clean chemistry to unlock the mystery of ‘mixing immiscibles’.

This will have applications in a range of global industries – from food processing and nutraceuticals to cosmetics and drug delivery (think more pure and effective fish oil capsules), says Flinders University Professor Colin Raston, senior author in a new paper, published today in Chemical Science.

“We now demonstrate how this process, using a common solvent and water, can avoid the use of other substance for controlling reactions across immiscible liquids, making it cleaner and greener” says Professor in Clean Technology.

“We conducted over 100,000 experiments to establish how liquids mix and what their flow behaviours are at very small nano-meter dimensions,” adds co-author Aghil Igder, also from the Flinders Institute for Nanoscale Science and Technology.

As well, the Flinders University team has also upsized the VFD machine on experimental biodegradable polymers to start making its organic substances and clean technologies available at scale to suit a range of industries.

The VFD has been used in multiple experiments to produce quality drug elements such as peptides, better fish oil and food products and many other value-adding green chemical processes which can now be replicated in a scaled-up version of the device which has been developed.

0 0 0
Previous : New carbon-negative technology could turn waste gases into valuable chemicals
Next : Vehicle Diagnostics may be the cure to reduce Fleet Carbon Footprint