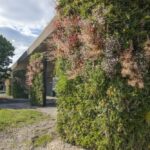 Air pollution from motor vehicles is an invisible danger that is a serious threat to our health and wellbeing. Richard Sabin, Managing Director of Biotecture, looks at how living walls can provide an innovative solution to the issue.

Air pollution is the single biggest environmental threat to health in the UK, with between 28,000 and 36,000 deaths a year attributed to long-term exposure, according to Public Health England. Much of this is emitted by vehicles and there is strong evidence that long term exposure leads to the development of coronary heart disease, stroke, respiratory disease and lung cancer as well as exacerbating asthma.

The type of air pollution emitted by motor vehicles are ultrafine particles, carbon monoxide, NO2, black carbon, hydrocarbons and some metals. Individually or in combination, these are responsible for the adverse effects on health. The Environment Audit Committee estimates that the costs of health impacts from air pollution is around £8.5bn-£20.2bn a year.

Recent studies by the UK Health Forum and Imperial College London, in collaboration with and funded by Public Health England (PHE), found that a 1µg/m3 reduction in fine particulate air pollution could prevent many illnesses each year, including approximately 50,900 cases of coronary heart disease and 4,200 lung cancers.

As the dangers of air pollution continues to impact public health, there is an increasing drive for Local Government and Highway Authorities to try and minimise roadside pollution caused by motor vehicles. 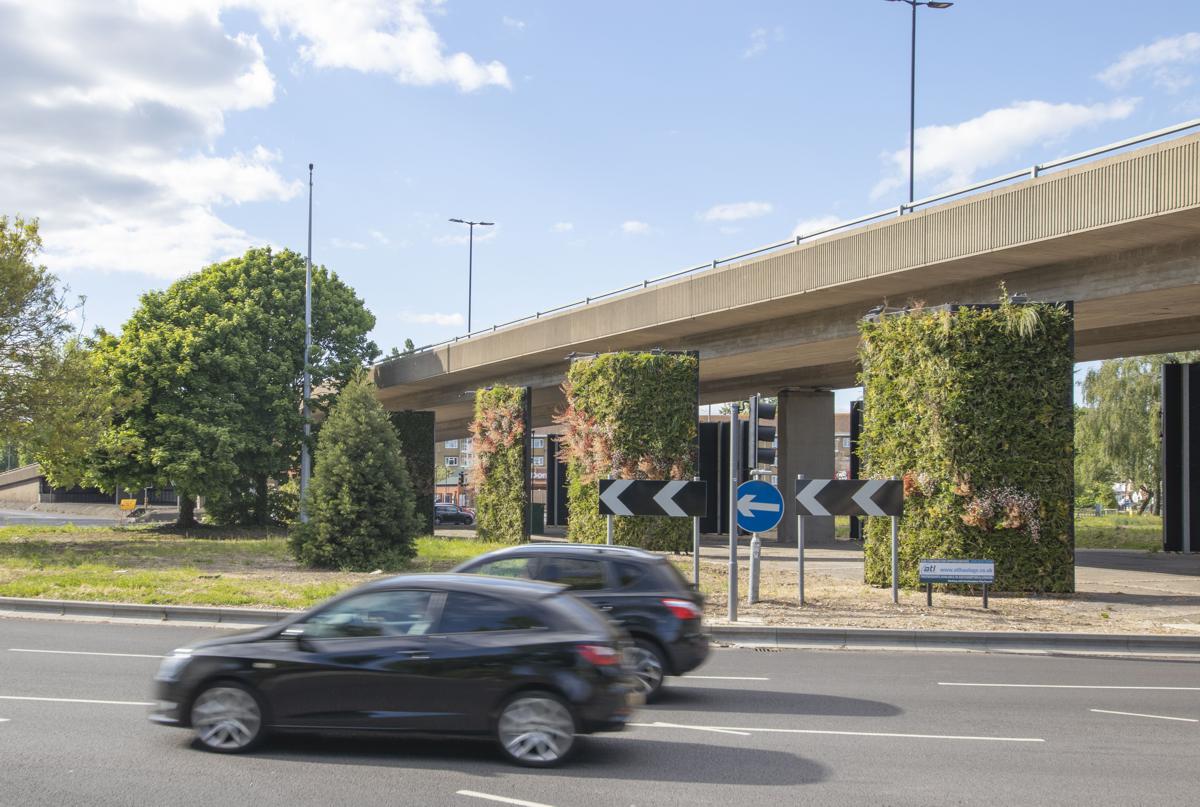 In response to a study on Air Quality, Southampton City Council outlined an air quality strategy. An outcome from this was the £8.2m project involving full reconstruction of Millbrook roundabout, which was completed in only 23 weeks and incorporated ten living walls.

Despite the size and complexity of the project, the installation of the living wall was completed in just 15 days. The roundabout sits on a main road into Southampton’s Western Docks, the second largest container port in the UK with £40bn of goods passing through each year. With over 36,000 vehicles and 3,000 lorries using Millbrook Roundabout daily, the existing roundabout had been deteriorating for some time. Following an in depth study on Air Quality, Southampton City Council was looking to tackle the issue at the same time as other improvements to the roundabout.

As part of the project team we worked with Balfour Beatty Living Places and Southampton City Council to create the UK’s first highway living walls. This was to form an important part of improving air quality on what is one of the city’s busiest roads and saw the installation of ten of our freestanding living walls on its concrete support structures.

As a key entranceway to the city and nearby container port, the Council was looking to incorporate a solution that would be a welcoming feature on the roundabout.  We worked closely with the Council and Balfour Beatty to create an intricate living wall design, featuring 11,295 plants, improving both the appearance of the flyover and the quality of the air around it.  Each wall houses 17 different species of carefully chosen plants, such as Euonymus, Convolvulus cneorum and Acorus gramineus, all of which capture particulate matter, helping to reduce pollution and support cleaner air – smaller leaves and a variety of textures are better air filters of PM10, which is the harmful particulates emitted from vehicle exhausts traffic fumes.

The planting design was based on the shape of the river Itchen, flowing from Central Hampshire and joining the sea at Southampton, the home of Millbrook Roundabout.  We felt that this design reflected the importance of the sea and water in Southampton’s identity.  The river Itchen is home to various protected species, making it a designated site of special scientific interest.

The selected plants were chosen for their surface density, which allows them to better capture toxins, gases and pollutants – many of which are approximately 1/25th of the diameter of a human hair.  Our choice of species was informed by testing carried out by Imperial College London on a living wall we previously installed, enabling us to maximise the capture of pollutants.  The reduced levels of particulates and NO₂ around Millbrook Roundabout dimmish both residents’ and visitors’ exposure to damaging pollutants.

A key part of the brief from Southampton Council was to mask the concrete support columns of the flyover, however, this had to be done in a way that was not fixed directly to the flyover, so as to allow for the concrete supports to be easily accessed for future structural inspections.  In collaboration with Balfour Beatty Structural Engineering Consultants, we designed a bespoke, arrowhead-shaped design on a freestanding steel frame that the living wall panels were mounted to.

The refurbished Millbrook Roundabout showcases 260m² freestanding living walls, offsetting pollution from the 36,000 vehicles that use the roundabout each day. 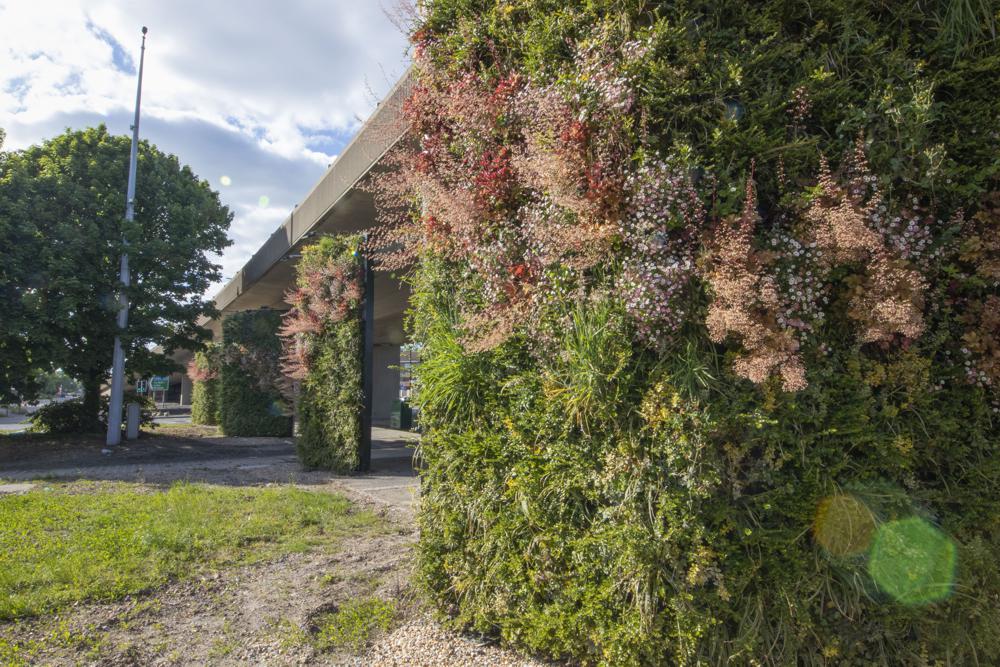 Along with improving air quality for people, the Millbrook living walls provide other benefits. The dense foliage attracts and provides refuge to many different species such bees, butterflies, ladybirds and lacewings, creating a well-balanced local ecosystem.  For example, 100m2 of a masonry wall will have around four species of spider living on it, whereas the same area of living wall will support 19 different species of spider. That difference directly correlates up and down the food chain, meaning there will be more species that spiders predate and more that predate on spiders.

This pioneering collaboration between Biotecture, Balfour Beatty and Southampton City Council is the first of its kind in this country, setting a precedent for managing roadside pollution in other parts of the UK.  The project was awarded a prestigious ‘National Gold’ Green Apple Award by The Green Organisation, an international environment group, dedicated to recognising and rewarding environmental best practice around the world.  The Green Apple Environment Awards are one of the most popular environmental campaigns in the world, with entries from Governments, Ministries and Regional Authorities, alongside organisations.