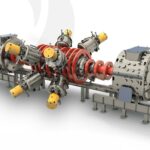 Following scientific milestones with current fusion reactor, Norman, TAE receives investments from long-term partner Google, as well as Chevron, Sumitomo Corporation of Americas, and others to fund the construction of the company’s sixth-generation research reactor that will demonstrate the viability of net energy from TAE’s approach

After achieving temperatures greater than 75 million degrees Celsius and demonstrating unmatched real-time control of plasma with its state-of-the-art fusion research reactor, Norman, TAE Technologies today announced that it has secured strategic and institutional investments to fund the construction of its next research reactor, Copernicus.

As the world leader in hydrogen-boron fusion research, TAE’s non-radioactive approach represents the fastest, most practical, and economically competitive solution to bring abundant carbon-free energy to the grid. TAE’s Copernicus reactor, which will be constructed in a 100,000-square-foot facility in Irvine, Calif., is designed to demonstrate the viability of achieving net energy generation with TAE’s advanced beam-driven field-reversed configuration (FRC) – the penultimate step on TAE’s path to commercialize clean fusion power.

TAE’s fifth-generation reactor, Norman, was unveiled in 2017 and was designed to keep plasma stable at 30 million degrees Celsius. After five years of experiments to optimize Norman’s capabilities, the machine has proven capable of sustaining stable plasma at more than 75 million degrees Celsius, 250% higher than its original goal.

With a track record of over delivering on milestones and performance capacity, TAE has attracted the support of visionary investors and to date has raised a total of $1.2 billion for its commercial fusion development. In its recently closed Series G-2 financing round, TAE secured $250 million from investors in the energy, technology, and engineering sectors to support the company’s mission to deliver a long-term solution to rapidly growing electricity demand while providing global energy independence and security. TAE’s safe, non-radioactive approach avoids carbon and particulate emissions, mitigating any impact on the environment or climate change. 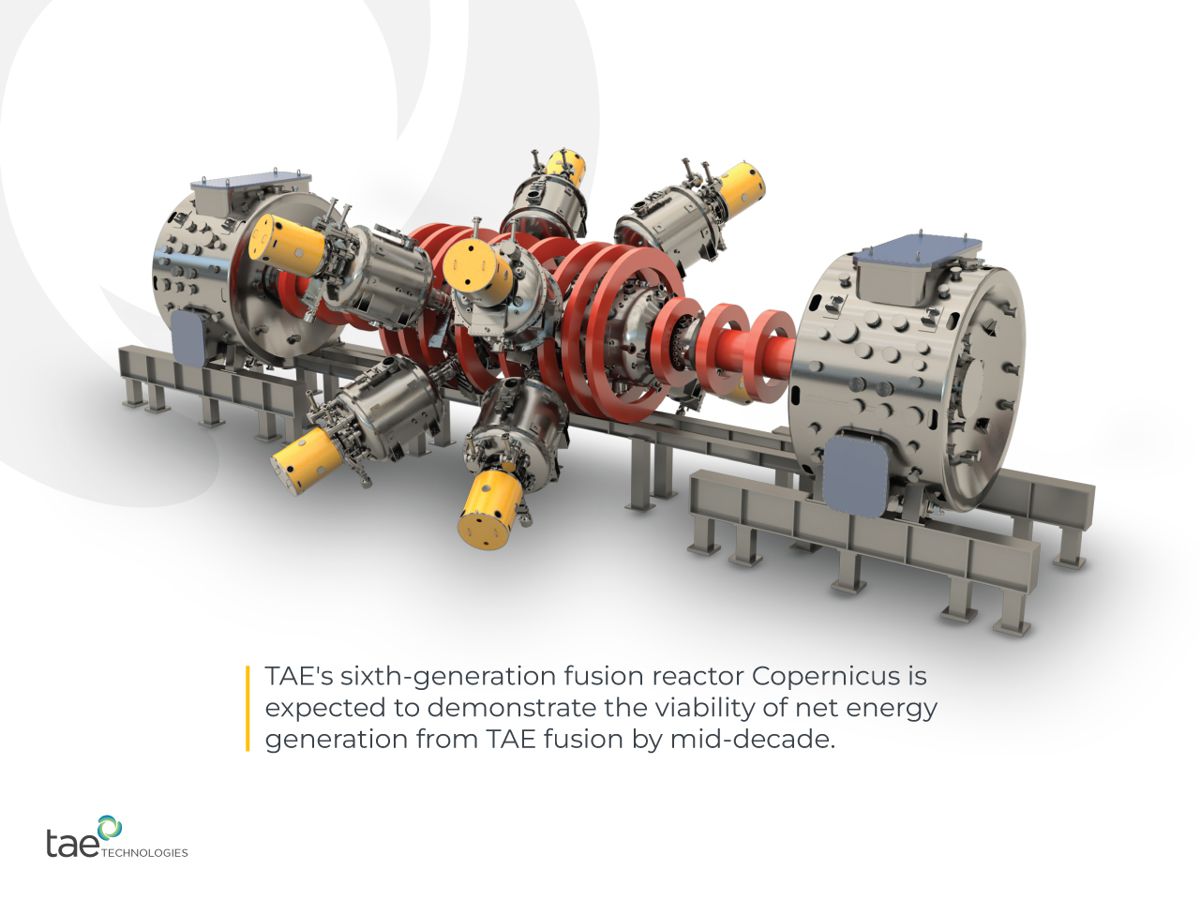 Chevron, Google, Reimagined Ventures, Sumitomo Corporation of Americas, and TIFF Investment Management are among the company’s most recent investors, along with a large U.S. West coast based mutual fund manager and a big U.S. pension fund. Goldman Sachs served as the exclusive financial advisor in connection with the Series G-2 financing round.

“The calibre and interest of our investors validates our significant technical progress and supports our goal to begin commercialization of fusion by the end of this decade,” said Michl Binderbauer, CEO of TAE Technologies. “Global electricity demand is growing exponentially, and we have a moral obligation to do our utmost to develop a baseload power solution that is safe, carbon-free, and economically viable.”

Sumitomo Corporation of Americas (SCOA) is TAE’s first investor from Japan, and will become a partner in deploying commercial power and other fusion-derived technologies to the Asia-Pacific market. SCOA, the largest subsidiary of Sumitomo Corporation, the Tokyo-based Fortune 500 global trading and business investment company, has signed a commercial collaboration agreement to pursue TAE-based technologies in Japan and Asia.

“We look forward to being a partner in bringing TAE’s clean energy solutions to the APAC market, which will be paramount to sustaining local economies without impacting our planet,” said Sandro Hasegawa, General Manager, Energy Innovation Initiative Americas at SCOA. “We are pleased to support TAE’s ground-breaking fusion technology to create safe, sustainable energy sources across multiple industries and applications.”

Google continues to be an exceptional computational AI and machine learning partner for TAE. With a collaboration that began in 2014, Google’s investment follows the success of the jointly developed Optometrist Algorithm, which deploys Google’s machine learning to optimize the operation of TAE’s research reactors, substantially advancing the rate of progress and ultimate performance achieved. Programmatic steps that used to take well over a month can now be achieved within one day. In addition, the companies have developed breakthrough capabilities in holistic post-processing and integrating a large set of independent diagnostic measurements to produce high-fidelity insights into experimental data at record-breaking scale. 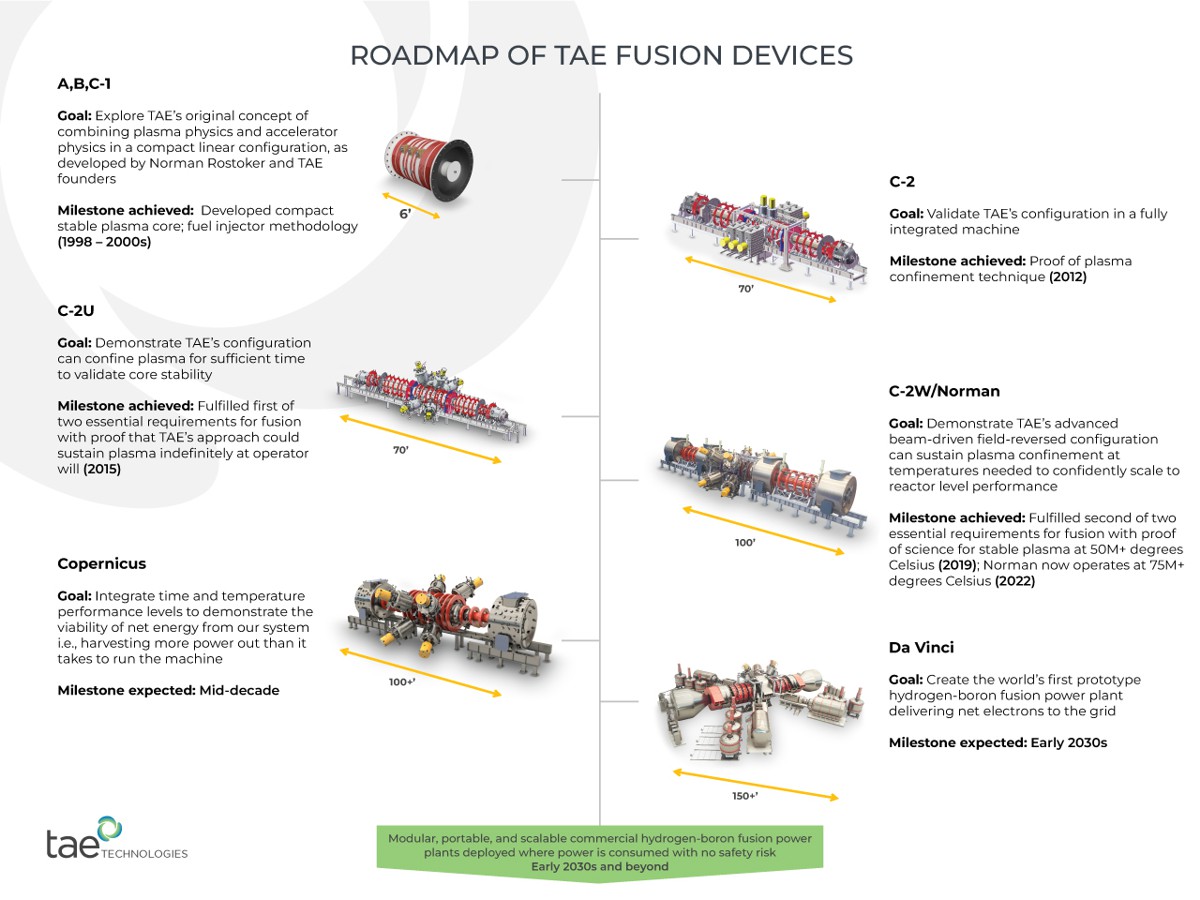 Reimagined Ventures also joined this round as part of its mission to invest in visionaries who are solving some of society’s biggest challenges. “Limitless zero-carbon clean energy is no longer a pipe dream – it’s a future within reach thanks to TAE Technologies’ incredible scientific advancements,” said Jack Litowitz, Director of Strategic Investments at Reimagined Ventures. “Few challenges are as complex as replicating the sun’s energy generation process. The number of sectors and lives that TAE’s industry-leading work could positively impact is immeasurable. We’re proud to invest in Michl and his team as we believe they’re best positioned to forever alter the energy grid and democratize access to renewable fusion-based power for all.”

Chevron invested in TAE through its Technology Ventures unit, dedicated to energy innovation. “TAE – and fusion technology as a whole – has the potential to be a scalable source of no-carbon energy generation and a key enabler of grid stability as renewables become a greater portion of the energy mix,” said Jim Gable, Vice President, Innovation and President of Chevron Technology Ventures.

TIFF Investment Management Chief Investment Officer Jay Willoughby, stated: “Opportunities to back extraordinarily talented teams who can change the world do not come around often. The progress TAE has demonstrated and continues to make on the road to safe, clean, commercial fusion power is unique and something we all need.” 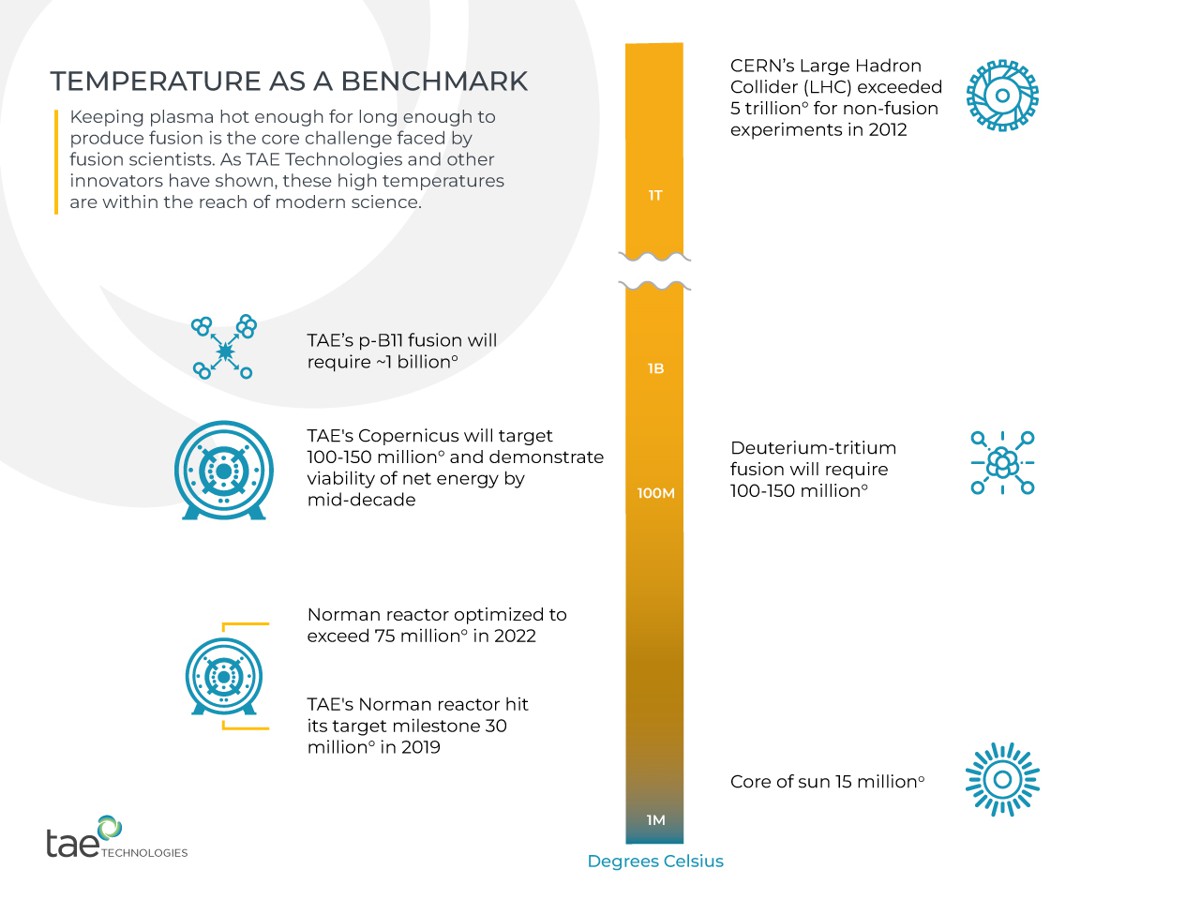 What sets TAE apart from other fusion efforts is the company’s proprietary advanced beam-driven field-reversed configuration (FRC), a combination of plasma physics and accelerator physics, developed to integrate into the grid with TAE’s preferred fuel source, hydrogen-boron, also known as proton-boron or p-B11.

TAE is committed to non-radioactive hydrogen-boron both for its abundance – in excess of 100,000 years supply globally – and because it is the cleanest, safest, most economical terrestrial fuel cycle for fusion, with no geopolitical concerns or proliferation risks. The company has worked toward delivering cost-competitive, environmentally benign hydrogen-boron fusion since its founding in 1998. Now, thanks to its proven money-by-milestone success and steady scientific progress, TAE is on the cusp of achieving that goal.

“Through successful training of Norman’s state-of-the-art control system, paired with proprietary power management technology and extensive optimization of our machine learning algorithms, we have achieved a scale of control at an unparalleled level of integrated complexity,” said Binderbauer. “Our long-standing expertise in fusion, together with seminal advances in design and operational mastery, are paying off handsomely as we progress toward delivering an inexhaustible clean energy source that has the capacity to transform the human experience and sustain future generations.”

0 0 0
Previous : Iteris wins contract for real-time traveler information system in Virginia
Next : HAUC(UK) and Transport for London partner to drive the Road to Net Zero